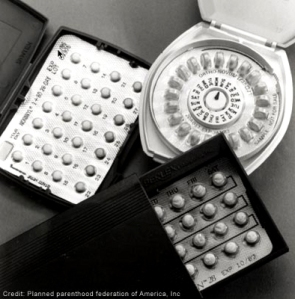 Even George Orwell could not have predicted the current level of absurdity surrounding women’s health in general and birth control pills specifically.  What chicanery are the men that run this country up to that they are seriously debating accessibility to birth control in the year of Our Lord 2012?  I feel as though I’ve stepped through a looking glass and been transported to a long-ago era before Margaret Sanger sought funding from Planned Parenthood to research a progesterone pill that would stop ovulation in the early 1900’s.  This is not an issue of religious freedom or morality, but one of politics and diversion by both political parties.

First corsets made a comeback and 4-inch stilettos returned to torture the next generation. Then in 2009 U.S. District Judge Edward Korman not only questioned the White House’s interest in the FDA’s decision-making process regarding  whether Plan B should be made available to women of all ages without a prescription, but rebuked the FDA for departing from its usual procedures.  Korman wrote that the FDA’s lack of good faith was evidenced by, “repeated and unreasonable pressure emanating from the White House.”  The federal court ordered that Plan B be made available over the counter to those 17 and older while the FDA continued its research, all of which turned out to be a huge waste of resources when Kathleen Sebelius, U.S. Secretary of Health, overruled the FDA’s conclusion that Plan B is safe for all ages citing concerns for parental rights and eleven-year-olds who may not understand the packaging.  I find it utterly ridiculous that the current administration believes they can ever appease social conservatives by claiming to have such concerns.  If a parent considers it their right to know about their daughter’s sex life, then it is their job to build a trusting relationship.  Tell a teenager that it is a Washington mandate and see how far that gets you.  The Department of Health and Human Services has never before said to hell with science, never before trumped the FDA, but then politics has never paid so well, either.  Perhaps HHS’s efforts would be better spent educating a country with the highest teen pregnancy rate among any developed country.

To be perfectly clear, Rick Santorum did not say he is against birth control.  What he said is that the Supreme Court was wrong to say that states cannot outlaw contraception in Griswold v. Connecticut (1965, YES, 196frickin’5).  1.5 million women in the United States, including me, take birth control pills for health concerns other than pregnancy prevention, but why would the average male politician be well-versed in women’s health?  Mr. Santorum also stated that sex has been deconstructed to the point where it’s simply pleasure.  And your point, Mr. Santorum?  With infidelity’s wild ride through political bedrooms, I am hardly looking to you for relationship advice or spiritual counseling.  My money is on hypocrisy.

The cherry on top of the movement to turn back time is the “religious freedom” debate regarding insurance coverage for no-cost contraception.  When I went to pick up the birth control pill that my doctor thought would work best for hormonal changes I was told that my insurance company wouldn’t cover it, just as my daughter was told about the name-brand pill her doctor prescribed as birth control.  Because I cannot afford $110 per month for those pills, we are trying a generic that might work, but certainly not as well.  These costly limitations on prescription contraception coverage were addressed in the health care reform bill that was passed in 2009.  Now, if I go to work for a religious hospital or university I am not entitled to coverage of that cost, nor is my daughter.  In my case it means night sweats, hot flashes, and mood swings.  For my daughter, who was married last summer and is watching her college investment pay off with a burgeoning career, it is her future and her children’s future.  The religious exemption may be extended to ANY employer that has religious issues with contraception coverage.  Religious freedom or money? Are women so threatening with our equal share of the job market, number of seats in university lecture halls, and longer life spans that the power structure has resorted to a paternal barefoot and pregnant strategy?  I may seem paranoid, but how does automated packaging of 1 million birth control packages go awry?  See…that’s the type of thinking that results from taking the cheapest pill instead of the right one.