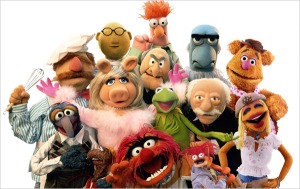 In an all-too-familiar effort to draw attention away from the world’s economic and political angst Fox Business Network recently accused the Muppets of brainwashing our children with liberal anti-capitalism ideology.  Anchor Eric Bolling kicked off the discussion by stating that the new Muppet movie teaches children class warfare by pitting the iconic Muppets against the villainous and hugely wealthy oil baron Tex Richman.  Walt Disney furthers their anti-capitalist agenda by energizing Miss Piggy, Kermit, and their friends to revive the defunct Muppet Movie Studio or lose it to Tex who will bulldoze it to drill for oil.  The Muppets do not have the $10 million in the bank needed to save the studio , nor are they good friends with Sam Walton’s family, so their only option is to complete repairs on the run-down property and put on a vaudeville-like Muppet Telethon.  I would definitely scrape up some change for the Muppets if they held a telethon and I think my friends would, too.  In short, they work their little felt bottoms off to save the studio.  Angles Tantaros of Fox News agreed with Bolling’s assessment of this diabolical movie, saying “It is brainwashing in its most obvious form.  I just wish liberals would leave little kids alone.”  In the real world where liberal and conservative parents’ wallets have been lightened by the Walt Disney corporation for decades, our littlest capitalists are immune to such imaginings.  My 4-year-old niece said to her mom last week, “You NEVER buy me anything!”  You gotta give her credit.  Perfect timing with Christmas on the horizon and I am all too familiar with her precocious delivery.  What my niece will likely take away from The Muppets movie is that if the Muppets can raise 10 million dollars by working hard then her mom and dad need to try harder so they can provide her with more of what she desires.  This Christmas she desires a touch-screen phone.  Our children are not in any danger of seeing money as a bad thing because of an evil oil baron that The Muppets trounce with hard-work and help from their community.  If anything, Miss Piggy dripping in jewels and wearing sequined high heels with a feather boa will revive the Muppet dynasty for another generation.