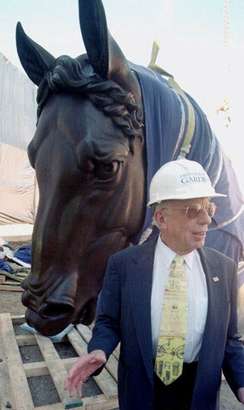 Frederick Meijer, the founder of “one-stop-shopping” died on Friday at age 91 after suffering a stroke earlier in the day.  Fred, as he was known in the community, was a free-thinker with common sense values who with the help of his friend Earl Holton built a small empire of Meijer retail stores.  In 1934 Fred’s father Hendrick opened a grocery store in Greenville Michigan at which Fred worked 40 hours a week while attending high school and where he met his wife Lena, who was a clerk.  In 1962 Hendrick and Fred opened the first Meijer Thrifty Acres.  Every child that grew up in Michigan after the mid-sixties remembers riding the mechanical horse at the front of every store for a penny.  I just noticed the other day that there is still a horse at the front of my local Meijer and amazingly it still costs a penny to ride.

My admiration for Fred was born when I went to work at a newly opened Meijer store in the late 90’s.  I was hired as an “everything gal” for the store and met Fred several times during those few years.  His favorite ice cream was blue moon and he would hand out pennies to children so they could ride the horse when he came in for a scoop.  He always had a pocket full of pennies.  Occasionally

I was asked to deliver gallons of milk and other sundries to Fred’s friends’ homes when they were ill.  I thought it was nice that they shared this personal information with an errand girl, but it was not surprising.  I was such a believer in Fred Meijer and Earl Holton that after a year I became a Hiring and Training Manager.  Earl was President of Meijer and had started at Meijer as a bag boy. 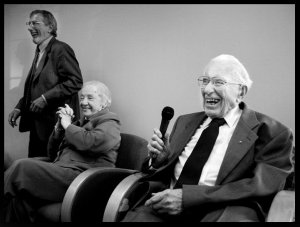 Fred’s Dad Hendrick was not nearly as fond of Earl as Fred was because it bothered him that Earl always had a smoke when he retrieved the grocery carts from the parking lot.  Up until a few years ago every Meijer store had a smoking break room so that customers never saw employees smoking out in the lot.  Earl’s approach to customer service was inspirational.  In the early years a customer asked him for a fry pan that was locked in a storeroom.  The only set of keys were with the store manager who had left for the day, so Earl removed the door from its hinges to get that fry pan for the waiting customer.  Fred empowered his employees and trusted their judgment because he believed that he could not possibly know everything.  Thanks to his wife Lena, all of the store’s bathroom doors swing out so that you don’t have to touch them with clean hands.  I’m surprised that sensible idea hasn’t caught on.  Sam Walton said he got the idea to include groceries in Wal-Mart from Meijer, and several other chains followed suit.

Fred and Lena Meijer kept the company family owned, choosing not to take it public several times over the past 30 years.  Their philanthropy is well-known throughout our community with the Meijer Heart Center and 125-acre Meijer Garden and Sculpture Park standing as living testaments to their generosity.  I am positive that there are many individuals who remember small acts of kindness from Fred.  I will always remember him as the billionaire that did not act like one, who spoke to me as if I was his equal.  It may be cliché, but it is fitting to say that they just don’t make them like Fred anymore.